I’m wrapping up the last of my sketches in my last handmade sketchbook with these two subway sketches and next time, my end-of-journal self portrait. I didn’t get around to binding another journal one in time and so switched to a Moleskine watercolor sketchbook as a stopgap.

The Moleskine would be perfect if only it wasn’t in horizontal format. I hate the way two-page spreads become very long and skinny. Trying to sketch in it vertically is awkward to hold. Working in it for a few weeks has given me the incentive to get a new book bound ASAP!

The day before I’d drawn these two guys snoozing back to back on BART. The coppery paint mixture worked perfectly for them too.

This lady carefully marked up her cheesy crime novel, “Guns Before Butter” with her pencil as she read.  The train ride was really bumpy and so my ink line got pretty squiggly. I switched to drawing her after a big guy with a bike got on and completely blocked my view of the man above her.

I experimented some more with the brown craft paper sketchbook, drawing with a black brush pen on BART and (above) adding white pen and colored pencil at home.

And below, some ink drawings done on BART with watercolor added at home later.

I’m not a fan of crowds, blockbusters or standing in line, but I put up with all the above to visit the Birth of Impressionism show in San Francisco’s De Young Museum in Golden Gate Park. I had planned to sketch in the park after the show but various delays only left time for these done while traveling there and back on BART and SF Muni.

I made a number of discoveries at the show and am looking forward to seeing it again, hopefully at a time when it will be less crowded. I really enjoyed many of the exquisite pre-impressionist paintings, and especially loved seeing the quite large “Whistler’s Mother” in person. Although the mother’s face appears soft and doughy, I could see in her eyes the universal worries, hope, dreams and sorrow all mothers experience.

I liked the detail of the little foot stool her son provided for her comfort but my niece and I chuckled about the ugly shower curtain hanging to her left. (Seriously, it looks just like a plastic shower curtain I saw on sale recently.)

I was also struck by how unskillfully made some of the early impressionist paintings appeared to me. I found myself thinking that if I’d painted them I wouldn’t have been satisfied with them. That made me consider what a harsh judge I must be of my own work. Then I wondered whether all the paintings in the show (and in museums generally) are considered fine works of art or are included in collections simply because they are historical records of work by famous artists?

And now for an abrupt change of topic….

Have you ever seen a gopher close up?

As we left the museum I saw a gopher pop his head out of a hole in the grass. He continued popping up and down, busy pushing dirt out of his hole. I thought he was so cute until I saw the close up (below) on the screen. 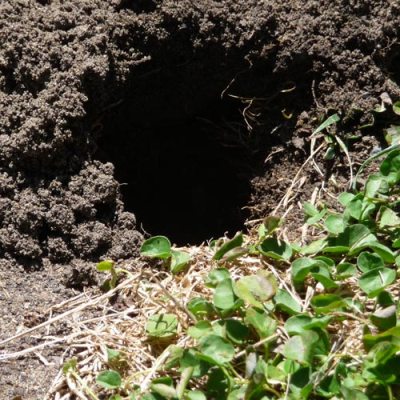 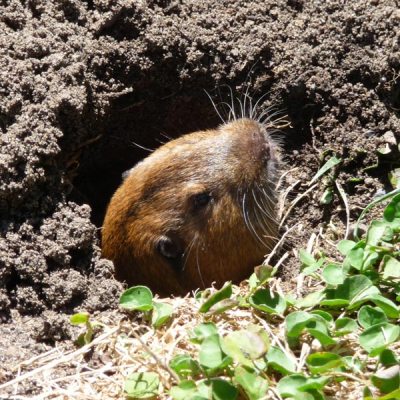 Yikes! We had gophers in my first San Francisco house. I kept planting things in the garden and the next morning they’d be gone, pulled under ground by a network of gophers. I finally gave up gardening at that house. Between the fog and the gophers it was hopeless.

For Worldwide Sketchcrawl 27 today I headed to San Francisco on BART  for a 10:30 meetup at the Ferry Building, sketching along the way. The couple at the top of the picture seemed to be on an unsatisfactory date. The woman seemed passive-aggressive: she’d gone along with bringing her clunky bike on BART and her stupid, ancient, ill-fitting helmet, but wasn’t going to have fun. Her date adjusted her helmet straps for her but while he kept his on all the way to the city (complete with duct tape patch), she wouldn’t put hers on.

The guy in the middle above is Pete Scully, sketched outside Peets’ Coffee at the Ferry Building. I had a great time sketching with him and my friend Sonia and other sketchcrawlers wandering the Financial District of SF.

There were too many people at the Ferry Building, shopping at the upscale foodie shops, being annoying tourists, and/or waiting for ferries. I waited in a line of 20 women for the restroom and didn’t even bother trying to get a cup of coffee at Peets. While we waited for Enrico to give us the “Go,” we sketched the scene. Yes, I exaggerated the crowds and the closeness of the Bay Bridge.

There’s a clarinetist (see Sketchcrawl 21 sketch) who is a permanent fixture at this spot, playing annoying screechy “music” that he segues into “Mary Had a Little Lamb” or “Popeye” whenever a kid approaches. Moms and their tots stop and dance while dads take photos and stuff money in his case.  I couldn’t wait to get away from the crowds.

Pete had the brilliant idea of going to the top of the nearby Hyatt Regency Hotel to sketch the view from above. We tried to go to the top floor (17) but the elevator would only take us to 14. We met a bellman on 14 and he said you had to have a key card to get there. I brazenly asked if he had one and he said yes. “Could you take us there?” I asked. He opened the door and swiped his card and sent us on up. What a sweetie! I wish I’d thought to tip him.

When we got off the elevator a gentleman informed us that the 360 degree-view-Regency Lounge was only for Regency Members and asked if we were members. I said no, but asked if we could just look at the view and draw pictures. He asked “For how long?” and I said “Oh, about 10-15 minutes” and he said OK. We were there for nearly an hour and nobody bothered us. We did tip him when we left and he invited us to help ourselves to any of the complimentary food and beverages but we declined.

Sonia and I were hungry so while Pete started sketching a cable car we bought lunch at a deli across the street. We ate sitting at a bus stop, the only seats around. People kept coming up to us and asking about buses. Then I tried sketching the cable car and the hill it goes up and down. I was doing pretty good until I somehow planted a street light in the path of the street car.

Heading north, Pete sketched an old German hofbrau that didn’t inspire me (though his sketch did, which I will link to when he posts it) so I drew him from across the street, sitting on his stool in front of McDonalds.

I was tired and about ready to call it a day but managed one more sketch. I was more interested in the almost spiral staircase, the shadows, and odd architecture than the mannequins in their jungle print undies. I’m not a fan of the Victoria’s Secret brand or their ads and I think maybe it shows in the way I subconsciously made the mannequins look like they were giantesses, trapped in the store window and trying to get out.

It was 4:00 and although the end-of-Sketchcrawl meetup was happening at 4:30 in Union Square I decided to just go home and relax rather than head towards more crowds. It was a great day!