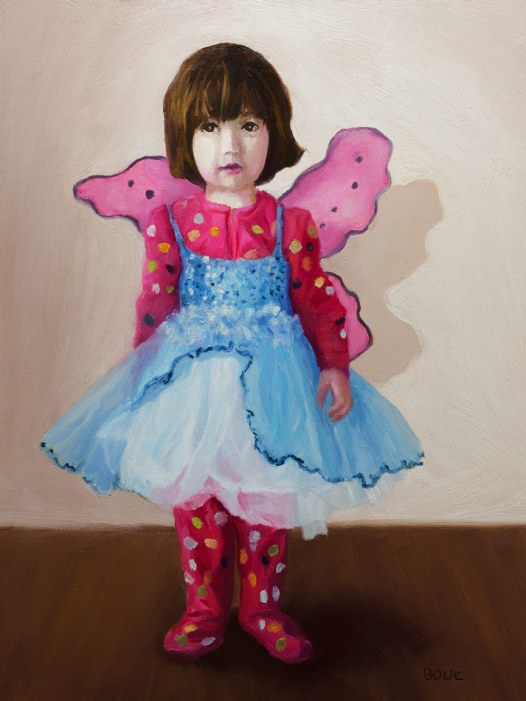 When one of my sketch group members sent me this photo of her little girl, I had to paint it, despite having never painted my own kids (except as they appeared in a dream once, as a bear and a tiger).

The original photo was taken on an iPhone with a busy background of kid’s toys and furniture. I experimented in Photoshop with different backgrounds and color schemes. I tried some in paint. But in the end I chose this simple grayish-warmish-whitish background.

I thought about putting some of her toys from the photo in the painting but decided I like the way she’s alone in an empty space. It reminds me of my own childhood photos where I usually looked kind of alone and perplexed about the big world around me. I guess that’s an example of how whatever the artist paints, she’s painting herself too.

16 replies on “Portrait of Violet: An Angel in Jammies and Tutu”

I can see why you HAD to paint her, Jana. She’s adorable. And I think the simple neutral background really sets off her colors. Love those feet.
annie

Thanks Annie, In the photo, she was kind of rocking back on her heels and her toes were off the ground, but I thought it would not read as believable (who can stand like that! other than tots). Jana

Yup – She is a sweetheart, and you captured her charm beautifully.

Thanks Sherry, Did you get my answer to your books on color question on GoodReads? Jana

I’m SO glad you changed your feed! Previously I was waiting until your posts piled up to five or a six at a time before I actually went to your blog. Instead today I open it up to find this lovely lady in my reader. I agree with Annie. The simple background really puts the attention on the girl.

I finally decided to change it when I realized how much it bugged me to not be able to see the posts from some of the blogs I follow when I read them in Google Reader. Thanks for the feedback and for taking the time to leave a comment! Jana

This is really great! I want jammies and a tutu just like these.

As Jennifer says, it is so great to have you pop up on our READER each time that you post.

Thanks for the feedback! I’d experienced the same frustration with other blogs and realized I was doing that to people too so changed it. Jana

She is precious! And you did such a good job capturing that look. So sweet.

Thanks Nel. I’m happy to see you here for a visit. I was just looking at DP yesterday and your work stood out–I could recognize it right away. I will always appreciate all the help and advice you gave me when I was starting out with oils. It’s funny but I’ve gone back and reread some of the books you recommended back then, and where they seemed so confusing then, now they make sense and help me see how much I’ve learned since then. (And happily, how much more there still is to learn)! Jana

What a beautiful painting! Wonderful expression on her face. (And yes, thanks for changing your feed to show the images!)

….and thank YOU for leaving such a nice comment! Jana

Breathtaking! I love it – her Mom must be over the moon.

Find me on social too: