I’ve been listening to a dumb book, Freddy and Fredericka, when I’m painting and I’m so glad I finally  finished it. I don’t know why I kept listening for all 26 hours. It’s a silly farce about a bumbling, imaginary Prince and Princess of Wales sent by the King and Queen to New Jersey on a quest to take back America (but really just to get the couple out of the country because they were embarassing fools).

The funniest part of the book was unintentional. It’s the way the book is read aloud. It’s narrated by a gentleman with an uppercrust English accent who  doesn’t even try to do American accents.  So all the Americans in the book, from southerners in Alabama to New Jersey motorcycle gang members speak with the same English accents as the Royals. The only laugh I got from the book was hearing the motorcycle tough guy talking with an English accent instead of with a New Joisey accent.

The book makes fun of the British monarchy as well as American politicians and culture. Maybe you have to be British to enjoy the book or maybe it’s just me.  I’ve never been a fan of farcical humor that uses silly names, misunderstandings and ridiculous plot lines to get laughs. 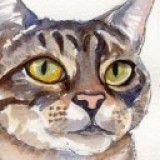 I am an artist who loves (and lives) to sketch and paint in watercolor, gouache, oils and digitally.

3 replies on ““Freddy and Frederica,” a book review”

I hate it when I get all the way through a book and realize it was a big waste of time. At least you were painting while you were listening. The looks on their faces really match how you described the book and, oh, isn’t Princess Fredericka curvy!

Yes, her curves were continually touted in the book.

I loved FREDDIE AND FREDERICA. I don’t understand how anybody could not like it who has a sense of history. There is lots of wordplay in F& F. Of course there are people out there who don’t like puns. One of the wonderful things about this book is that it runs the whole gamet of emotion from low farce to high tragedy. The only thing which will save our world is to relegate it to fiction.
-Arthur rqrf